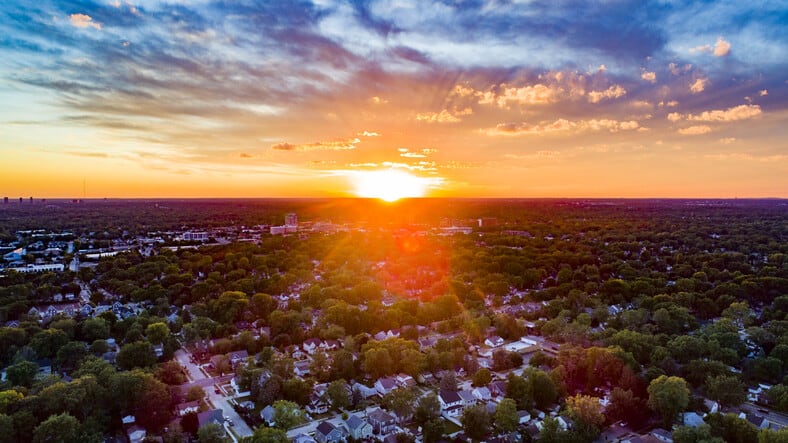 Where Is Keego Harbor, Michigan?

The small city of Keego Harbor is situated in Oakland County. It is in the metropolitan Detroit area in the great state of Michigan, within the United States. The city is a cosy community and has a tiny population of around 3,500 inhabitants.

Where Is Keego Harbor, Michigan?

Keego Harbor MI is located a mere 40-minute drive, and approximately 30 miles northwest on a map, from the downtown district of the city of Detroit. Keego Harbor is conveniently located at a comfortably commutable distance from Detroit.

Detroit is a fantastic city to visit, and is home to many interesting cultural sites, museums and landmarks for visitors to take full advantage of and get themselves immersed in. Keego Harbor has the benefit of being able to offer a much slower pace of life in a serene and friendly neighborhood, compared to the fast-paced lifestyle in the city of Detroit. The ‘Motor City’ is the largest city in Michigan, with the city’s current population approximately 670,000.

Keego Harbor, Michigan is a city which, on the map, lies sandwiched in between the beautiful, picturesque lakes of Cass Lake and Sylvan Lake. This unique location offers the residents of Keego Harbor ideal lakefront views all year round. Keego Harbor, Michigan is a great place for water sports enthusiasts to enjoy. Whether it’s renting a boat, kayaking, or going water skiing, this city is an excellent place to fulfill all of your water sporting thrills! Cass Lake is also a fantastic destination for fans of fishing!

Cass Lake is a glacial lake that was formed as a result of glacier activity where ice melted and went on to form a body of water, which is today Cass Lake.

In the late 1890s, Keego Harbor saw an influx of employment opportunities and welcomed the arrival of many new residents.

One key moment in the history of Keego Harbor, Michigan came in 1912, when criminal defense lawyer and real estate investor Joseph E. Sawyer bought a substantial amount of property in the area. Sawyer then developed the land and carved out a canal from Cass Lake to Dollar Lake, which he referred to as the ‘Harbor.’ Sawyer took the word “Keego” (meaning ‘fish’ in Ojibwe) from the Longfellow Poem, The Song of Hiawatha, and subsequently named the area, Keego Harbor.

On March 25, 1955, Governor G. Mennen Williams approved a Charter which finally established Keego Harbor as a recognized city, governed by a five-member City Council, removing it from the jurisdiction of the West Bloomfield Township.

In the present day, Keego Harbor, Michigan is a renowned tourist attraction and vacation destination of choice, particularly amongst water sports and nature enthusiasts. For this reason, more and more people every year decide to flock to Keego Harbor, in particular during the summer months, for a relaxing vacation opportunity. There are also plenty of impressive family homes, lakefront cottages, and marvellous apartment complexes dotted around Keego Harbor, Michigan.

With that said, Keego Harbor is still today very much a family friendly community, and a great city to raise kids. 49% of families in Keego Harbor’s population have children under the age of 18, which is 6% higher than the U.S. population national average of 43%.

Affordability and cost of living in Keego Harbor

Keego Harbor MI is located in Oakland County, an affluent county in the state of Michigan, which is located not too many miles away from the urban sprawl that is the city of Detroit. As a result, the cost of living in Keego Harbor is not always necessarily cheap across the board.

When weighing up whether or not a property is a sound investment, and offers good value, it is important to consider the property size vs. the price (per square foot).

Fortunately, average rent in Keego Harbor MI is reasonably affordable at $931 per month. This means Keego Harbor is therefore a much cheaper city to rent in compared to other more expensive cities throughout the state of Michigan, such as Ann Arbor and East Lansing.

The average size of a rental property in Keego Harbor 882 per square foot.

Up-to-date map data on real estate websites provide you with data and indicators on important aspects of Keego Harbor MI such as schools, crime rates, local grocery stores, noise levels, and rental prices for property in different neighborhoods. We recommend that looking at data maps is a good way to inform yourself about the pros and cons of renting real estate in different parts of Keego Harbor MI.

Despite being small in size, Keego Harbor boasts a wonderful array of restaurants, shopping outlets, public parks, and majestic outdoor open spaces for local residents to explore. Keego Harbor MI is a thriving community with plenty of booming quirky small businesses with a lot of character (particularly along Orchard Lake Road with its range of lively bars, cafés and restaurants) for local residents to enjoy visiting.

Moving to Keego Harbor in Oakland County, Michigan, is definitely a great decision. This welcoming lakeside community, with its small population, has a plethora of things to offer people of all age groups, both young and old. There are many activities available for active individuals and lovers of nature and the great outdoors to enjoy. So do not overlook Keego Harbor MI as a fantastic place to choose to buy or rent a property!

How Long Does it Take to Move Apartments?
What Happens if You Fail an Apartment Inspection?
What is Deducted from My Security Deposit?
How to Deep Clean an Apartment
HOME | PROPERTY DETAILS | SCHEDULE A VISIT